Noise reduction is an important part of today’s aviation research. In this interview, Jean Marc Wunderli from the Swiss Federal Laboratories for Materials Science and Technology (Empa) and researcher in the SESAR project, DYNCAT, describes how changes in air traffic management can help mitigate noise and emissions of arriving aircraft.

DYNCAT is a two-year exploratory research project that aims at demonstrating how to take into account environmental factors like CO2 and noise when optimising 4D trajectories, enabling safer, more cost-efficient and more environmentally sustainable operations in the terminal manoeuvring area (TMA).

What are the influencing factors for aircraft noise levels on the ground?

A key factor is the sound power emitted by the aircraft at a specific time. There are two possible sources of noise, propulsion noise and aerodynamic noise, whereby the latter usually dominates during approach. Aerodynamic noise is influenced by the configuration of the aircraft – the more air resistance there is, the higher the noise – and it highly depends on the speed of the aircraft. In addition, the height above ground also plays a role. The higher the aircraft, the stronger is the sound attenuation and hence the lower the exposure on the ground.

It is important to understand that these influences are by no means independent. For instance, flying higher during part of the approach (without changing speed) means the aircraft has more potential energy to dissipate before touchdown, and to achieve this the pilots may feel the need to configure earlier or to use the airbrakes for a longer time. This increases the sound emission of the aircraft and possibly also the noise exposure on ground in spite of the higher flight altitude. The DYNCAT solution aims to address this challenge with a holistic approach to support the pilots in configuration and energy management.

Your task in the project was to assess the environmental benefits. How was this done?

Piloted flight simulations were conducted with and without new flight management system (FMS) functionalities designed and implemented in DYNCAT (see figure 1). Using flight data recordings of all simulator flights, we calculated the sound emission of the aircraft during the entire approach and subsequently the noise footprint on the ground. This allowed us to make detailed comparisons between individual flights and to identify general benefits of the DYNCAT Solution. As an example, figure 2 below shows noise contours and averaged differences in level for flights with and without the new functionality. 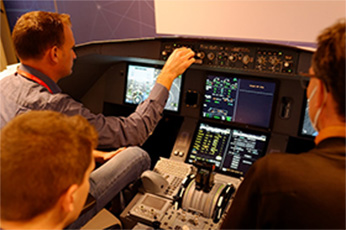 Figure 1: Piloted simulator trials on a Thales test bench were used to obtain flight data as a basis for noise simulation

How do you get noise maps from flight simulator data and how can you validate the results?

Our aircraft noise model sonAIR is capable of predicting the sound emissions of a wide range of fixed-wing aircraft dependent on flight configuration (power setting and aircraft configuration, i.e., flaps/slats, speedbrakes and landing gears) and ambient conditions, such as air density and air speed. It distinguishes between engine and airframe noise, and yields 3D directivity patterns. The emission model is combined with a sophisticated propagation model, which among others, accounts for meteorological influences. Individual flights are simulated according to a time-step procedure. The model has been successfully validated using measurements of real air traffic and achieved mean overall differences between simulations and measurements of well below one decibel.

What are DYNCAT's most important improvements regarding noise and environmental benefits in general?

As can be seen in figure 2 below, for the investigated scenario from the simulator trials the DYNCAT Solution enables a reduction in noise exposure on ground over a wide area along the flight path and most importantly, during the last 10 nautical miles to the runway threshold, where noise levels are highest and a reduction is most beneficial. As the new FMS capabilities support pilots in flying more accurately and predictably, an additional advantage is the avoidance of single especially noisy flights, which are a particular nuisance to populations living under the flight path.

Generally speaking, however, noise and fuel consumption are often conflicting targets: high speeds lead to higher levels of airframe noise but low speeds may not only increase fuel consumption (the engines consume fuel even in idle) but also negatively affect capacity. With the altitude as a further variable, many options exist and it is a key benefit of the DYNCAT project that it has provided the tools to actively choose a situation-specific optimum among them. Hence, it is possible to decide for certain arrival routes or time windows, for example at night, whether noise reduction or fuel consumption should be weighted higher. The current setting already yields a reasonable compromise, allowing for higher speeds in greater distance from the airport, where noise is not that crucial, but aiming at low sound exposure during the last part of the flight. Here the DYNCAT approach has proven its ability to reduce noise and save fuel at the same time. 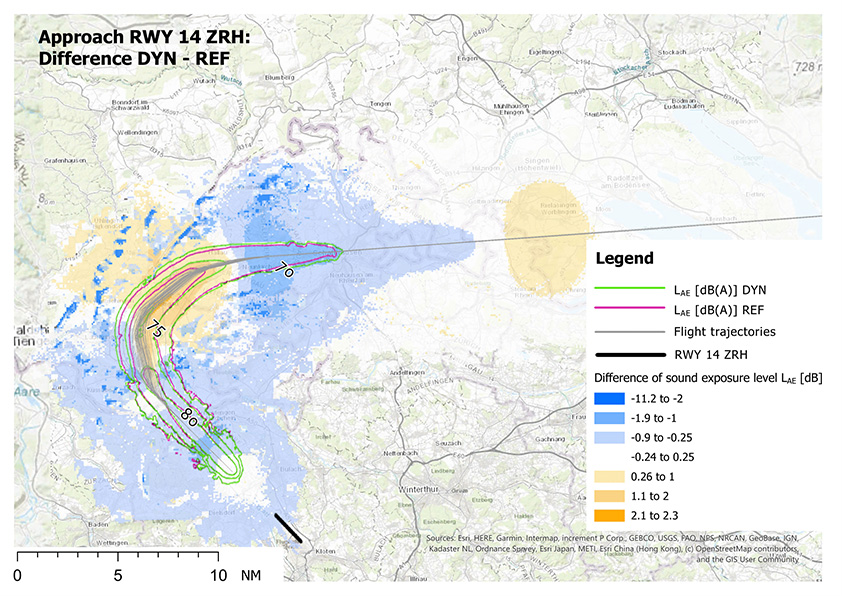