Today’s constraints in European airspace are seriously impeding the European aviation sector's ability to grow sustainably, compete internationally, and are causing inefficiencies in service provision, such as traffic delays. The fragmentation of the European airspace is estimated to cost at least EUR 3 billion a year and up to 50 million tonnes of carbon dioxide[1].

Tackling limits to growth is central to the EU Aviation Strategy and an efficient air traffic management system is instrumental in achieving its objectives. European airspace must therefore be able to accommodate the increasing air traffic, whilst cutting costs, reducing the environmental impact of air transport and guaranteeing the highest level of safety, which are the high-level goals of the Union’s Single European Sky (SES) initiative.

Recognising the shortcomings of Europe’s current airspace architecture, on 17 February 2017, the European Parliament called on the European Commission (EC) to implement the concept of the European Upper Flight Information Region (EUIR), as an enabler for the gradual establishment of a ‘Trans-European Motorway of the Sky’[2].

In light of the above, and building on the achievements of the SESAR[3] project, the European Parliament[4] invited the EC Directorate General for Mobility and Transport (DG MOVE) to launch a pilot project to produce a study on the SES/SESAR airspace architecture.  This study should result in a schema of the intended airspace organisation and design and its operations based on an efficient service provision architecture and the enabling infrastructure. Following the SESAR methodology, it should translate the strategic objectives of the SES in terms of safety, capacity, environmental impact and flight efficiency into operational and service provision requirements.

DG MOVE has tasked the SESAR Joint Undertaking (SJU) to carry out the study, in close coordination and with the support of the Network Manager. The SJU is working closely with key stakeholders and building on the SESAR operational concepts, architecture and solutions already developed as well as on the ongoing SESAR 2020 work programme activities.

The study shall result in a proposed architecture of the European airspace, embracing the new era of innovation and digital technologies ongoing in SESAR JU supporting the European Aviation Strategy.

In parallel, the SESAR Joint Undertaking is defining the second wave of SESAR2020 projects as well as defining the update of the European ATM Master Plan 2018. The ATM Master Plan is the roadmap towards the essential operational and technology changes foreseen to deliver the SESAR contributions to the Single European Sky performance objectives. This latest update also puts an emphasis on digitalisation and the opportunities that the rapid changes in technology are bringing to the sector.

With both of these ambitious projects in mind, the SJU aims to:

The objective of this first public workshop was to receive early stakeholder input to help shape the outcome of the study.

[3] The SESAR (Single European Sky ATM Research) project is the technological pillar of the SES and aims to develop the new generation European ATM system. The SESAR project comprises ATM related definition, research and development, validation and deployment activities and the related governance mechanisms and partnerships.

[4] Request of the European Parliament (MEP Marinescu): "The Pilot project would evaluate a new design for the EU airspace architecture based only on traffic flow efficiency, direct routes, and the most efficient number of control centres. This proposal should take in account SESAR-related technology in order to assure the most efficient deployment locations".

Photos from the event 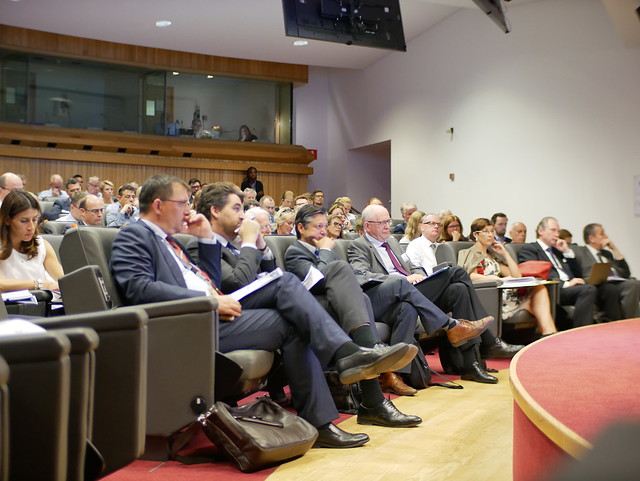