Air traffic controllers from Norway and Italy recently tested new software in a real-time validation exercise at research institute SINTEF's premises in Oslo. The software aims to help them make better use of the airspace and reduce flight delays. The solution is expected to also reduce fuel consumption and CO2 emissions.

In front of large screens showing the air traffic over Milan, flow management positions (FMPs), supervisors and air traffic controllers (ATCOs) from Norwegian Avinor and Italian ENAV sat deeply concentrated in SINTEF's premises in Oslo during the last week of September. They tested new software developed by SINTEF in collaboration with IDS AirNav, ENAV and EUROCONTROL. On 29 September, the doors were also opened to the rest of the aviation industry and 70 participants from 28 different businesses in Europe came to see demonstrations of several digital tools, which, with the help of optimisation and machine learning, assist ATCOs in using the airspace more efficiently.

Yannick Migliorini from the French air traffic service DSNA was impressed of what he saw.

"It is really cutting-edge research, it addresses a very important problem for the ATFCM community, it uses cutting edge technology and the results seem to be positive judged by the end users", he says.

The problem he refers to is that air traffic controllers' area of ​​responsibility has until now been divided into static sectors, where the individual ATCO takes care of all air traffic within this airspace. When the capacity in this sector is full, the ATCO must ask the aircraft to wait on the ground or change its route. This can cause delays and increased CO2 emissions.

"Using what is called dynamic configuration, we give the FMPs the opportunity to move the borders of the sectors in almost any direction, so that they can better balance the air traffic between them. Novel design solutions support ATCO’s work in the dynamic environment. This can help reduce flight delays and emissions in areas with a lot of traffic", explains Chief Scientist Amela Karahasanovic, who led the SINTEF team of experts in optimisation, artificial intelligence, and human-computer interaction.

They developed the systems as a part of the SESAR projects Digital Network Management Services (PJ.09-W2 DNMS) and Separation Management and Controller Tools (PJ10-W2 PROSA).

At the SINTEF premises in Oslo, FMPs managed demand and capacity, while the ATCOs controlled the traffic while the sectors of Milan airspace were changing.  During the exercise, a workload calculator, dynamic airspace configuration service, SIMADES simulator and ATCO control working position including speech recognition developed by SINTEF interacted in real-time with EUROCONTROL’s INNOVE simulator and the local traffic load management tool from IDS AirNav.

Yannick Migliorini appreciated that ATCOs and FMPs carried out the testing.

"You can never know how good a tool is before it has been used by the actual users. And that is for me the sign of good research", he says.

Important to reduce bottlenecks in traffic

According to EUROCONTROL delays are in average about 25 minutes per flight today. Project manager Kris Delcourte from EUROCONTROL clarifies that delays due to an imbalance between the number of aircraft and the capacity in the sectors only make up a small part of these delays. But the use of dynamic configuration could, according to Delcourte, be important in reducing bottlenecks in the air traffic. However, that requires the network managers at European level to be informed when a new sector configuration is generated. In certain cases, the network managers can intervene or send warnings to the places where the hotspots are. If the network managers get the correct picture, it may be possible to relax some of the restrictions.

SESAR JU project manager Oznur Uygur believes that dynamic configuration will be adopted in the future, along with existing and other new solutions.

"When these solutions start working together, the airspace users will gain more benefits because they will receive better demand capacity balancing (DCB) data and their preferences will be taken into account, it will be good because the workload for the air traffic controller will be under control.

The CO2 emission will be reduced because less regulations might be needed. So, there are many benefits that I can see", she says. 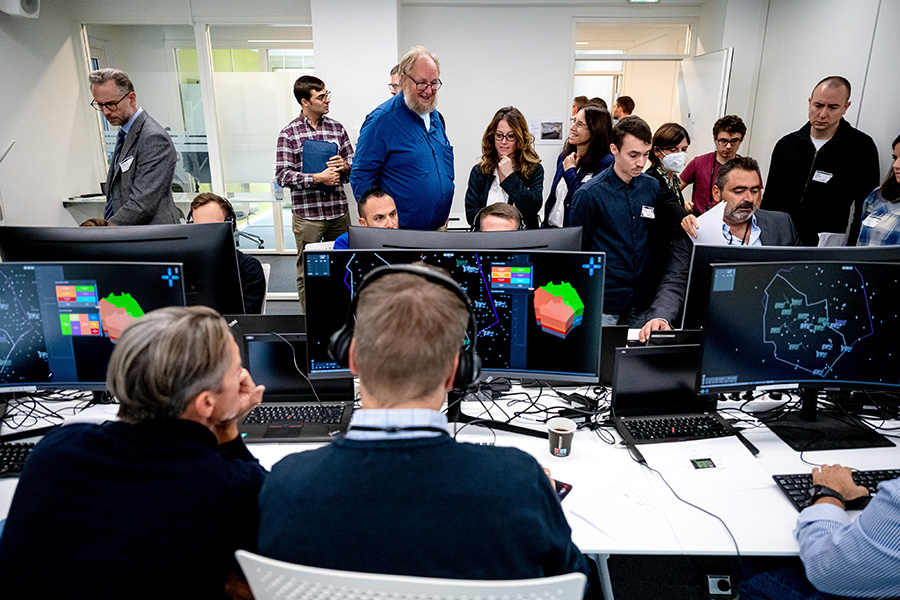 This project has received funding from the SESAR Joint Undertaking under the European Union’s Horizon 2020 research and innovation programme under the grant agreements N° 874463 and N° 874464.