Air traffic management (ATM) deals with disruptive weather on a regular basis, but such events are likely to become more frequent and extreme as the climate changes. In turn, unpredictable weather patterns are exacerbating further the situation as aircraft are unable to fly their most environmentally optimal trajectory. Gathering on 13 September in Naples, researchers in the SESAR 3 JU CREATE project presented its work to assess the impact of ATM operations on the climate, while also improving resilience to weather phenomena in a changing climate.

With the project coming to a close on 30 November, the event was an opportunity for the CREATE partners to present their scientific results. CREATE developed a climate and weather-aware concept of operations (ConOps) encompassing a multi-aircraft four-dimensional (in space and time) trajectory optimisation framework. It also built an environmental scoring module (ESM) to evaluate the “greenness” of aircraft trajectories. This considers CO2, non-CO2 emissions and contrail probability formation during the en-route phase of flight, in addition to NOx and particulate matter emissions (related to the impact on air quality) during the approach and departure phase. The algorithmic approach is fast enough to be easily implemented at different stages of the trajectory lifecycle; for example helping to resolve hotspots in the network due to weather hazards, or air quality sensitive regions, within the context of an evolving traffic picture. The models were tested using fast-time simulation for the North Atlantic region extending into European airspace, and a terminal manoeuvring area (TMA) use-case for a typical medium-size airport (Capodichino) close to dense population in the Mediterranean. The scoring, based on environmental performance dashboards common to airlines and air navigation service providers, showed it was possible to exploit detailed and accurate weather predictions to update aircraft trajectories to avoid contrail-sensitive areas, adverse weather conditions, and minimise the climate impact.

The event was also an opportunity to hear the results from other exploratory research projects, such as the ALARM project, and to receive feedback about the CREATE outcomes from representatives of airports, researchers studying environmental impacts and experts in ATM optimisation. 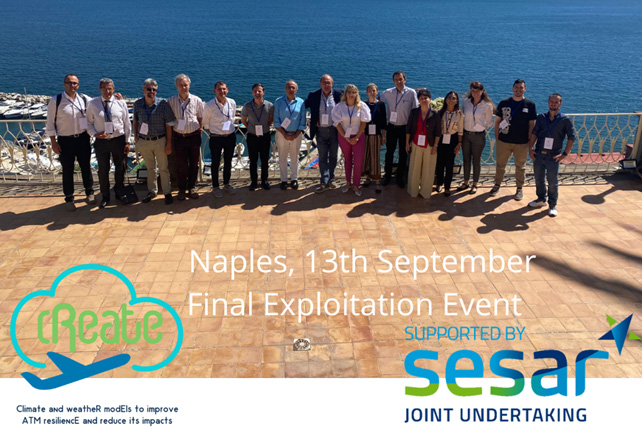