SESAR partners working on an information service to help manage wake turbulence separation between aircraft have discovered the possible use of Doppler Lidar sensors to monitor wake vortices, in addition to their initial purpose of measuring upper wind conditions. The discovery was made by SESAR 3 JU founding member, Leonardo, during tests carried out within the framework of the AART project (Airport, Airside and Runway Throughput Project PJ.02-W2). The campaign was conducted at Frankfurt Airport initially as a wind data collection campaign to support the validation of a new SWIM service, METForWTS. The service aims to integrate MET data into the ATC systems that are managing novel wake turbulence separation concepts.

Wake vortex turbulence refers to a disturbance in the atmosphere that forms behind an aircraft as it passes through the air. Air from below the wing is drawn around the wingtip into the region above the wing by the lesser amount of pressure above the wing, causing a vortex to trail from each wingtip. Wake turbulence is potentially hazardous because it dissipates quite slowly and can affect aircraft flying behind the aircraft in question for several minutes. Doppler Lidars are sensors used to measure the wake vortex in order to help maintain safe separation between aircraft arriving into airports.

Typically, the sensors measure the wake vortex by scanning rapidly up and down from a position close and perpendicular to the path of the aircraft. Normally, the same Lidar sensors placed for wake detection cannot be used to carry out wind monitoring and detect runway-oriented wind shear posing another severe threat, especially for landing aircraft.

With the Lidar used during this campaign, however, it was possible to overcome this limitation and detect wake vortex and runway oriented wind shear simultaneously. To do so, the Lidar was configured so that the laser power was not compromised when shorter pulses are transmitted. This is needed in order to maintain a long operational range and prevents that mechanical adjustments to the telescope must be made. Additionally, pulse length needs to be adjustable “on-the-fly” and the signal processing must allow enough range gates to be processed in real time. 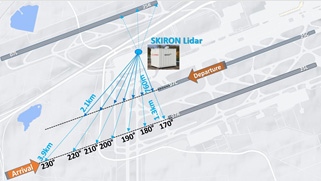 Measurement set up at Frankfurt airport. The proof of principle consists of seven vertical scans (0-30° elevation) at azimuth angles, starting from the perpendicular view at 170° to the runways up to 230°. The WV sample length amounts to almost 4Km for arrivals. The entire scan took 20s offering an additional capability besides wind data and glide slope monitoring.

The additional  flexibility in finding appropriate sites for sensor installation while being able to see the vortex not only at one cross section of the flight path are benefits in their own right. The figure below shows an example measurement of a wake vortex “tube” at different cross sections trailing behind a landing 747.

RHI- Wake Vortices overlay image of a landing Boing 747. The WV are clearly visible at angles up 60°off the perpendicular direction (220° from north).

Thanks to this configuration, only one instrument is needed to collect detailed information about wind on final approach and during initial departure and monitor wake vortex.   In doing so, the multitasking of lidar has the potential to lower costs and investments into sensor infrastructure.

More about MET data and services for wake turbulence separation