SESAR’s AMU-Led U-space very large-scale demonstration is planning a campaign of urban air mobility (UAM) demonstration flights in the Netherlands, Spain and the UK over the course of the summer months. The aim is to demonstrate the feasibility of efficient data exchange in real-time between drones, their remote pilots and the air traffic management system.

Seven demonstrations are taking place throughout summer of 2022 in Amsterdam (NL), Enschede (NL), Rotterdam (NL), Santiago de Compostela (SP) and Cranfield (UK). The project will use large electrical vertical take-off and landing (eVTOL) platforms for passenger and cargo transport, combined with smaller unmanned aerial systems (UAS) performing delivery of goods and medical supplies, surveillance or support for emergency services. The demonstrations are taking place within the framework of U-space, the EU’s initiative to integrate drones safely and securely into urban air spaces.

“After having carried out an impressive amount of work, where our consortium devised and implemented cutting edge concepts of operations for UAM, prepared futuristic yet round the corner use cases such as air commute shuttle or last-mile parcel delivery, and integrated innovative unmanned traffic management services, at last we are ready for take-off”, clarifies Pablo Menéndez-Ponte Alonso, project leader UTM of NTT DATA Spain that coordinates the European consortium of 17 different enitities that take part in the AMU-LED project. “Cranfield is our first although essential demonstration, as it will allow us to understand the readiness of this technology by confronting the actual challenge.” 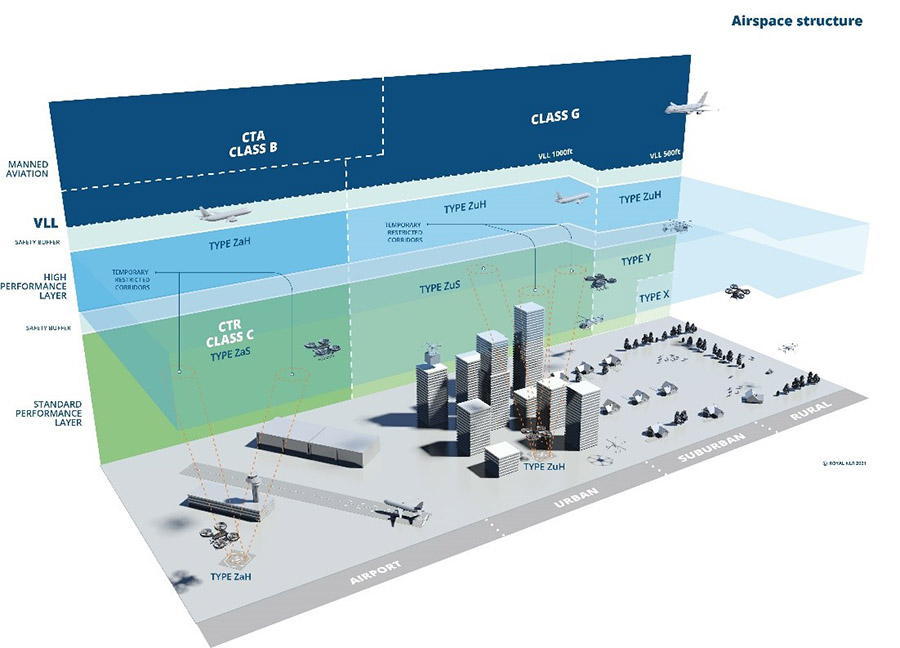 What can be expected during the demonstrations?

In June, the campaign started with the feasibility case in Cranfield, proving the readiness of the AMU-LED solution, technologies, and systems. These tests led by Cranfield University, took place at Cranfield Airport, a facility which has its own air navigation service provider and air traffic controllers, and its own pilots and aircraft. This demonstration was a prerequisite for the subsequent demonstrations, proving that the AMU-LED solution is ready and safe to be tested in more complex environments. A second part of the Cranfield demonstration will take place in September.

After proving the feasibility of the AMU-LED solution, in August the project will continue testing its solution in Amsterdam and Enschede, focusing on public acceptance and social impact. In Amsterdam, the tests are led by the Royal Netherlands Aerospace Centre (NLR) and will take place in the heart of the city, at the Marineterrein. Using a focus group to gather data, the team will perform various flight demonstrations, testing different aspects of U-space and certain public acceptance indicators such as noise nuisance, perceived safety, trust in the technology, privacy concerns or visual pollution. Mitigation measures for the concerns raised by the focus group will be proposed on the basis of the data gathered.

Enschede will follow, demonstrating the social impact of UAM. Space53, a test and innovation centre for unmanned systems, is in charge of this demonstration, which will take place between the Space53 location at Technology Base and Twente Airport, and the city of Enschede. Showcasing various socially relevant use cases such as medical delivery, firefighting or police surveillance, this demonstration will prove the social impact that UAM will create when implemented.

In Rotterdam, the economic viability of UAM will be demonstrated also in August. This test is being coordinated by AirHub and will take place in the port area of the city. It will be done in collaboration with the Port of Rotterdam Authority, which wants to investigate the viability of transporting ships’ crews directly from the vessel to the hotel. Other use cases will be showcased as well, flying different UAVs and VTOL aircraft.

The city of Santiago de Compostela will host the final demonstration of AMU-LED, where all the previous aspects – feasibility, viability and desirability – come together in a big final show. Coordinated by the technology centre ITG – Fundación Instituto Tecnológico de Galicia the demonstration will focus on the correct implementation of all the aspects in urban environments, as the final showcase of how U-space can enable urban air mobility. This will be demonstrated in September and in October.

Throughout these demonstrations, the project team will gather data about the various aspects being tested, which will then be analysed. This will let the project draw up results for the further development of U-space, providing information about the most efficient way for U-space to enable UAM, providing a safe, effective and viable solution for smart cities.

Read about the project

This project has received funding from the SESAR Joint Undertaking (JU) under grant agreement No 101017702. The JU receives support from the European Union’s Horizon 2020 research and innovation programme and the SESAR JU members other than the Union.