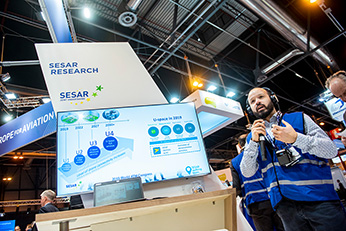 The U-space walking tours organised by SESAR JU during World ATM Congress 2019 provided a close-up view of the new digital and automated data services needed to support safe, efficient, secure access to airspace for large numbers of drones. The European Commission’s vision for this new service market has already introduced a regulatory framework for drones – due adoption by Parliament in May 2019 - while airspace rules are due to be in place within the next 18 months. “SESAR has been part of the blueprint since U-space was launched by the Commission two years’ ago,” said U-space project manager Ludovic Legros. “We are here to support the development of U-space service and capabilities in close collaboration with all the concerned stakeholders, including European Aviation Safety Agency (EASA).”

The walking tour introduced research projects revealing how U-space works, and highlighting technologies needed for drone services to be deployed in line with the European roadmap. To achieve successive levels of deployment between 2018 and 2030, SESAR has launched 19 research and development projects, including 10 very large scale demonstration projects due for completion by the end of 2019.

CORUS also considers the technical enablers necessary for drones to operate safely, and the walking tour took in separate projects addressing critical communications, surveillance and tracking, and aeronautical information management shared between the ground and air. First among these, attendees learned about the Drone Critical Communications (DroC2om) project which is testing a hybrid data link solution capable of operating in multiple environments. Troels Sørensen from Aalborg University explained readily available cellular connectivity in cities can be combined with satellite links in rural areas to ensure continuous coverage for drones equipped with additional antenna and modems.

Surveillance and tracking plays a key part in establishing a common operating picture for U-space, a priority for the IMPETUS project introduced by ENAIRE and CRIDA. Marta Sánchez Cidoncha showed how a federated approach allows equitable access to U-space and paves the way for high density operations. This is achieved via second layer of airspace service providers delivering consistent mission-driven services. More complex scenarios were introduced in the next project, Technological European Research for RPAS in ATM (TERRA), which considers the technologies necessary to provide resilience in case of unplanned events. Further insight was provided by the French air navigation service provider DSNA, a partner in the large scale demonstration projects PODIUM and USIS which are testing initial UTM services with a range of unmanned systems. As Ludovic Legros explained, “Delivering these projects by the end of 2019 will provide a clear indication of what can be deployed in the next two years.”

Finally, attendees learned about the DRone European AIM Study (DREAMS) project which is looking at differences in aeronautical information needs between unmanned and manned aviation, and identifies a range of data services needed to deliver weather warnings, terrain and geofencing information for visual and beyond visual line of sight operations.