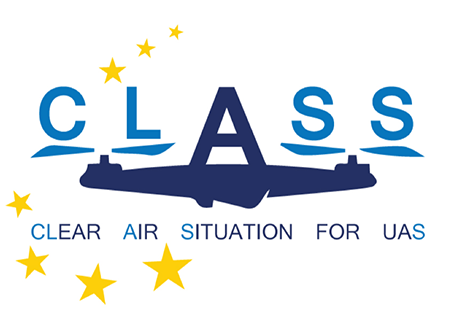 Reducing the risk of conflict between airspace users becomes more important as more drones enter the airspace. The Clear Air Situation for uaS (CLASS) project examined the potential of ground-based technologies to detect and monitor cooperative and non-cooperative drone traffic in real-time. The consortium fused surveillance data obtained using a drone identifier and tracker, and holographic radar, to feed a real-time UTM display.

CLASS tested tracking and display of cooperative and non-cooperative drones in six operational scenarios, ranging from an out-of-control leisure drone, conflicts with emergency operations, and incursions by rogue drones. Various scenarios were carried out by project partners to benchmark the surveillance and data fusion technology and achieve the lowest rates of false alarms. The functionalities provide the basis for a real-time centralised UTM system, which can be used by all stakeholders, from drone operators to air navigation service providers, authorities and airports. The functionalities were also designed to support advanced services, such as geo-fencing (where the drone pilot is warned automatically if he trespasses into an unauthorised zone), geo-caging (where the drone pilot is warned that he is leaving a pre-defined zone), conflict detection and resolution.

As a result of the demonstrations, CLASS was able to define and detail the functional and technical requirements for tracking, monitoring and tactical deconfliction.
For example, tracking requirements will vary from statically managed to dynamically managed airspace where
real-time decisions are necessary because of conflict, or new dynamic geo-fenced volumes. CLASS also found variations in the performance of tracking technology and recommended the drawing up of standards for different U-space services. For example, there is a difference between tactical deconfliction services and on-board detect and avoid systems, which means these must operate effectively to manage the wide range of drone types and sizes.

Further research is recommended to scale up the operational scenarios to simulate surveillance in denser environments, initially involving tens of drones.

Airbus Defence and Space is an integrated company composed of four Programme Lines: Military Aircraft, Space Systems, Communication Intelligence and Security and Unmanned Aerial Systems. Airbus has been involved in the Air Traffic Management business as a system integrator of critical components. In this frame, Airbus’ engineers have been working for decades on confliction detection and resolution algorithms.

Aveillant specialises in the development and production of innovative radar products. The company was created as a spin-off from Cambridge Consultants in 2011 to take to market the ground-breaking Holographic Radar technology. The team includes some of the world’s leading experts in radar design and signal processing.

ENAC, the French Civil Aviation University, is a public institution under the supervision of the French Ministry of transport. Its mission is to provide ab-initio and further training for the executives and main players of the civil aviation world and do research in a variety of air transport related domains.

The Norwegian University of Science and Technology (NTNU) in Trondheim is the largest and most prominent Norwegian university in engineering and technology. The Department of Engineering Cybernetics (ITK) is part of the Faculty of Information Technology, Mathematics and Electrical Engineering (IME) at NTNU.

Unifly is the leading provider of UAS Traffic Management (UTM) software in Europe. Not only active in research projects, Unifly’s platform is a deployed product that is currently in use by prominent European air navigation service providers.